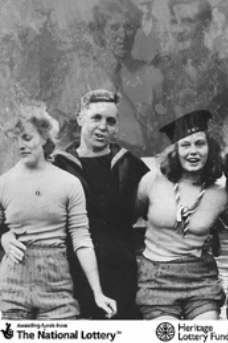 “All over Scotland, communities have been getting together to mark the 60th anniversary of the end of the Second World War. I doubt, though, whether any group has made a better job of this act of remembrance than the people of Carlops and West Linton, whose fine show based on their own reminiscence project had four triumphant performances in Carlops Village Hall over Hogmanay. Beautifully co-ordinated, directed and co-written by Gerda Stevenson, the script wove together half-a-dozen real-life wartime stories. Their deep local roots give them a fine edge of unpredictable detail; and the quality of Stevenson's staging, featuring a cast of 34, was at least as impressive as the writing and structuring of the script.”    Joyce McMillan, The Scotsman, January, 2006.

“This evocative and poignant piece from the Pentlands Writers' Group involved 34 amateur actors, aged from eight to well into their twilight years. The action moved effortlessly between local Pentland villages, Lanarkshire, Hampshire, Rangoon and Germany. A living lesson in history, both social and military.”    T. W., Peeblesshire News, January 2006.

During 2005, National Lottery money became available to community groups in order to commemorate the 60th anniversary of the end of the 2nd World War. The Pentlands Writers' Group applied to this fund in order to research, write and produce a community play, based on local memories, and also to produce an accompanying booklet. Our application was successful, and in Autumn 2005, we launched our ambitious project with a weekend of films, talks and an exhibition in Carlops Village Hall. 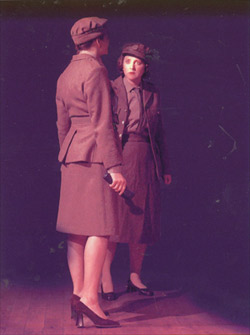 by Gerda Stevenson
When the Pentlands Writers' group (of which I'm a member), offered me the job of directing the proposed Pentlands At War play, I had no hesitation in accepting. I was born and brought up in West Linton, and spent a good deal of my childhood frying up on campfires by the old Roman bridge near Mendick, swimming in Westwater; and I remember lighting birthday cake candles once, with a pal in the woods beneath the Kips. The Pentland Hills have been a backdrop to my life wherever I've lived since those early days. 11 years ago, I returned to these 'Hills of Home,' as Robert Louis Stevenson called them, making my home in West Linton's neighbouring village of Carlops.

During the early years of my professional career as an actor, I was a member of the Victoria Theatre, Stoke-on-Trent. It was there, under the legendary artistic directorship of Peter Cheeseman, that I learned the richness of theatre which is firmly rooted in its community. In Stoke, we constructed plays about local industry: the railways, the steelworks, the coal mines and the Potteries, all based on interviews given by local people. The Pentlands Writers' Group was proposing a similar approach to play writing.
The inspiration in this case came from Stuart Delves (Convener of the Pentlands Writers' Group) and Catriona Taylor, who had written and produced an ambitious and hugely successful community play some years ago in Dorset.
Initially, I intended only to edit and direct our play, although I was very keen to be involved in gathering the memories, particularly since I had grown up knowing many of the potential interviewees. I wanted to interview Willie Lawson. I'd known Willie all my life, a highly skilled joiner, who has a lot of local knowledge. He began by describing all the shops that he could remember in West Linton, as a boy growing up in the village during the 2nd World War. Many of these shops were still there when I was a child during the '60s, and Willie's memories began to stir my own. He also told me about a couple of Italian POWs, called Cellani and Lenati, who worked at Robinsland Farm down the Deanfoot Road. I remembered picking rosehips along the Deanfoot Road with my classmates, and as I repeated the Italian names that Willie had given me, the rhythm of a skipping rhyme began to beat its way into my imagination. I knew then that I wanted to be involved in writing the play as well as directing. My fellow writers kindly agreed to have me on board in both capacities. 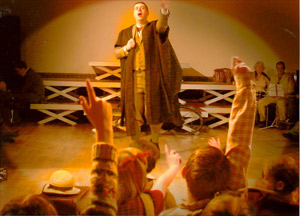 The process of writing the play was exhilarating. The five writers met on a weekly basis, sharing the many rich local stories we had unearthed, relating them to our reading on the subject. We decided that we would not use the actual names of people whose stories we were dramatising, with one exception: we included, in the very final scene, a litany of names of those who didn't make it back home from the war. We were all individually clear about which stories we wanted to dramatise, and were careful not to tread on one another's territory. These meetings were very stimulating, and we began to see a possible structure emerging. I was impressed with the elemental simplicity of the entries in the Reservoir Keeper's ledger, which I'd read at the exhibition we'd mounted for our launch of the project. Thinking of the serenity of the Pentland Hills, it seemed extraordinary, to find in the ledger's 'Remarks' column, separate from the references to weather and reservoir water levels, the stark statement: “War declared on Germany.” Here lay the symbolic kernel of our drama. We all agreed that we should start and finish the play high up in the heart of the Pentlands, at North Esk reservoir. In fact, the Pentlands – the geographic spine of this part of Scotland – became the backbone of our play, moving out from the local to the universal, from the Pentlands to the south of England, to Germany, India, Norway and home again.