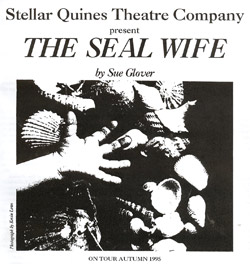 After our first production of Night Sky, actresses Muriel Romanes and Irene Macdougall joined the company.

Our second production was Sue Glover's haunting play The Seal Wife, which I directed. This time we received a small grant from the Scottish Arts Council, and were also assisted by a prestigious list of Friends, including Baroness Helena Kennedy, the Countess of Strathmore, Edith Macarthur, and Juliet Stevenson, who generously donated towards the production budget.

We were now receiving recognition, with favourable press comments such as:

“A big sense of maturity and skill, an impressive start.”  (Scotland on Sunday, April, 1994)

“...impeccable...a vintage cast, which brings a rare weight to the proceedings.” (The List, November, 1995)

We had been working on producing a Stellar Quines repertoire, which would include commissions from Scottish women writers, and, in the process, I'd come across the work of Janet Paisley, a brilliant poet and short story writer. Much of her prose was in the form of sizzling dialogue, and I felt that she had a dramatic instinct within her writing. I contacted her, we met up, and I suggested that she might consider expanding one of the dramatic monologues she'd sent me (an extended poem) into her first full length play. Stellar Quines commissioned Refuge from Janet, and this quite exceptional script, its action set in a women's refuge – moving, funny, and deeply disturbing -  won the coveted British-wide Peggy Ramsay Award. The judging panel included Simon Callow and John Tydeman (former Head of BBC Radio 4 Drama). This award is not made to the playwright, but to the company as a budget in order to mount a production of the winning play. The Peggy Ramsay Foundation gave Stellar Quines £50,000. Janet Paisley's creativity and imagination was a significant mile-stone along the journey of putting Stellar Quines on the map. I directed Refuge, which was enthusiastically received by audiences and press. On the week in which Refuge opened at Edinburgh's Traverse theatre, the Herald reported: “If the SAC is sending out signals about how to run a company then we should look no further than Stellar Quines.” (The Herald, March, 1997)

Meanwhile, I had also been making contact with a number of theatre companies and literary agents, in Britain and abroad (including Playbox Theatre at the Malthouse in Melbourne, Australia, run by the indefatigable Aubrey Mellor), and identified a list of plays which I felt could become part of Stellar Quines' repertoire. These were:

Honour, by Joanna Murray-Smith (Australia)
In Her Sight, (later entitled Without A Trace) by Carol K. Mack (U.S.A)
The Clearing, by Helen Edmundson (England)
The Memory of Water, by Shelagh Stephenson (England)

I also discovered, through my interest in the neglected early 19th Century Scottish novelist Mary Brunton, the work of her contemporary Joanna Baillie. I went into Edinburgh National Library, and read  a number of Lanarkshire-born Baillie's considerable repertoire of plays – 27 in all! Sir Walter Scott and Lord Byron rated Baillie's playwriting skills  highly.  Byron's verdict on her work was: “If it takes testicles to write drama, then Joanna Baillie certainly has them!” He also asserted that Baillie was: “Our only dramatist since Ottway and Southerne,” adding that “Women (save Joanna Baillie) cannot write tragedy; they have not seen enough or felt enough  of life for it.”

Lynn Bains suggested a moving and thought-provoking American play – Emma's Child, by Kristine Thatcher, which took as its theme the issues of childlessness and disability. Under the Stellar Quines Rehearsal Room  banner, I directed a rehearsed reading of Emma's Child at the Traverse, Juliet Stevenson and John Bett in the central roles. I was also very keen to give an airing to Carol K. Mack's play In Her Sight, a remarkable drama about the blind pianist, Maria Paradise, a patient of Franz Mesmer, and for whom Mozart wrote a piano concerto. The play's philosophical themes examine the nature of perception and vision, utilitarian thinking and the unquantifiable nature of art. In Her Sight was included in the Rehearsal Room context, under my direction.